5 of the Best New Forest Hikes 🥾

Take a Hike Across Ancient Woods, Heaths and Coasts, all in New Forest National Park

Located in Hampshire and Wiltshire in Southern England, New Forest was designated as a Royal Forest in 1079 by King William I. This, however, doesn’t necessarily mean that it was a dense forest back then more like it is today; a forest can be more akin to a reserve, put to the side for special uses like a royal hunt for the king, which is what William the Conqueror wanted to use this area for, as he went around calling it his “new forest”.

Now designated as a National Park, the New Forest, found between Southampton and Bournemouth, comprises an area of around 566 kilometres square. It covers a wide range of habitats, ranging from pine forests, coastlines, moorlands and deciduous woodland, but isn’t very hilly, let alone mountainous. There are ponies, pigs and deer that run wild in this forest, and the commoners have an ancient right named “pannage”, which allows their pigs free passage to the forest and eat the acorns there, which still happens to this day.

Here, I’ve chosen a handful of day routes through the National Park, with an average New Forest hike taking around 20 kilometres to complete. You will never be too far from some form of civilization, but it’s always good to take a map, which are more for guiding and inspiring rather than for following step-by-step.

HIGHLIGHTS – Prior to first hiking in the New Forest, you should know a little about enclosures, which are wooded areas enclosed by walls or fences. Several can be found in the New Forest, and some date all the way back to the 1700’s, made to keep out the animals that belonged to the commoners at the time to encourage trees to grow more. This hike, the the Clay Hill Woods, goes through several of these enclosures. The hike also goes through Church Place, one of many lodges in the New Forest where royalty would once stay between hunts, and all that’s left of them now are raised earthen banks.

DIRECTIONS – Starting from a car park nearby to Lyndhurst, you must follow some paths that travel through the woods towards Beechem Lane. It’s an ancient track which goes all the way back to before the 18th century. Prior to turning left to Denny Inclosure, follow this lane to the right past a little lake. Cross the Inclosure, bear right and follow the path towards Church Place, and you’ll be able to view the earthworks, what remains of what was once a Royal Hunting Lodge.

Follow the cycle track southwards past Denny Lodge through Denny Wood, and turn left into Denny Lodge Inclosure, and keep going until you’ve crossed the railway line. From there, head south-west in front of Ladycross Lodge, then slowly back round to cross over the railway again.

Tracks throughout the New Forest will direct you towards Standing Hat, meaning a small tree-covered hill. Proceed straight through Pignal and Ramnor Inclosures and King’s Hat, and the track should take you directly back to the car park. 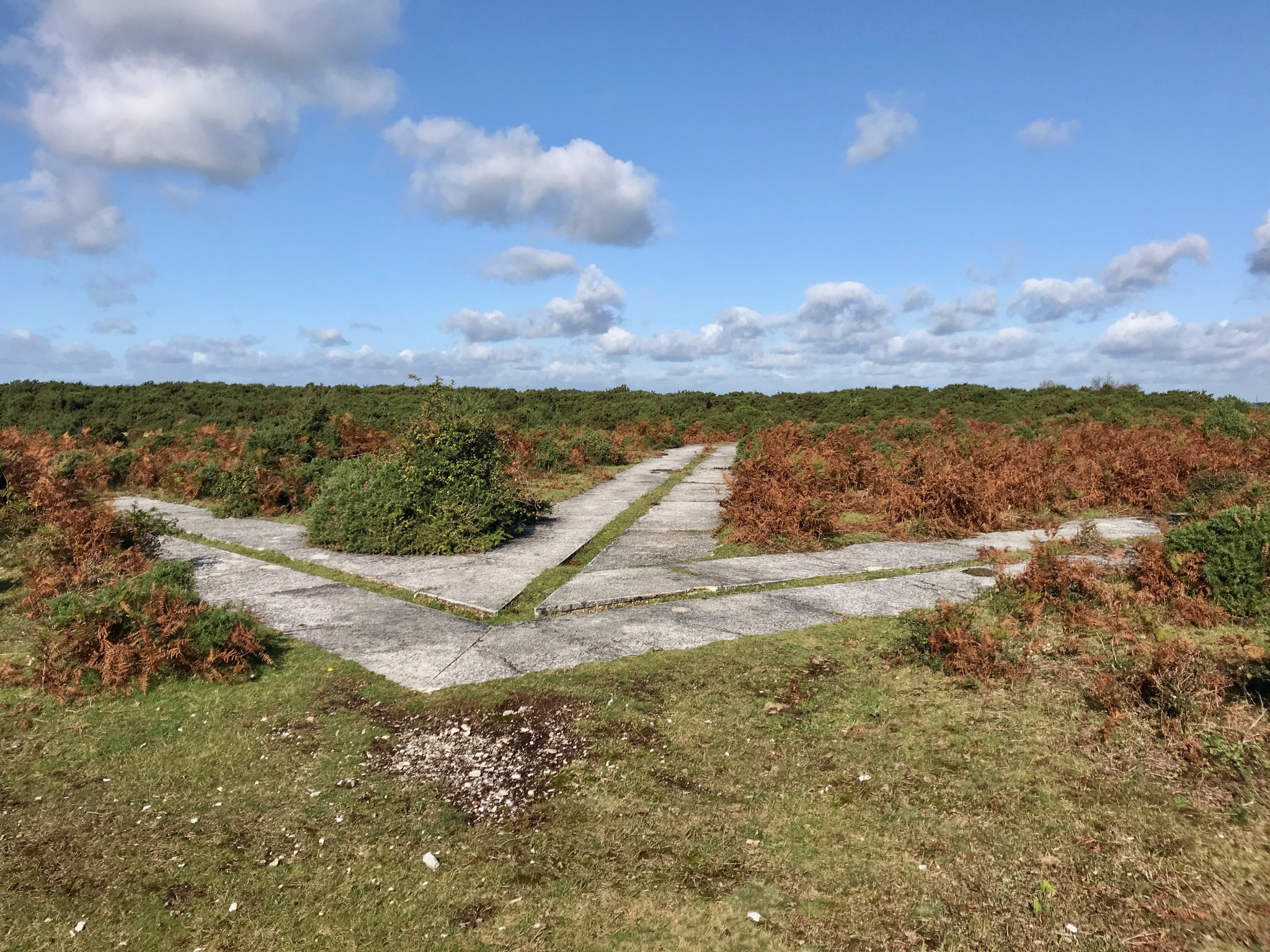 HIGHLIGHTS – New Forest isn’t just all about trees; there is also good heathland with great views over the woodlands, and sometimes over the sea too. Some points to watch out for are Abbots Well, where a well used throughout the centuries by travellers along the road towards Southampton stands. You’ll also see Hampton Ridge on this route. Since the well is so small, somewhat resembling a wood manhole cover, it isn’t the easiest to spot.

DIRECTIONS – Starting at the car park, head in a south-westerly direction on the path across Fritham Plain into Sloden Inclosure. When in the woods, you will see a lengthy line of earthwork, as well as the Churchyard, where a royal hunting lodge once stood. When you’ve exited the forest, cross Hallickshole Hill, and over Hasley Hill, which is inside of an enclosure. You should notice the path’s sandy soil is slightly red, which is because of its high content of iron.

Follow the footpaths onto the roadhead by Ogdens, in order to not follow the wetter grounds which surround Latchmore Brook. Cross the stream that follows the wall, continuing up Abbots Well next to Windmill Hill, then take the main track up the hill towards the trig point, on to Hampton Ridge. Stick to this path, keeping the large inclosures on your right side as you reach Picket Corner topping Island Thorns Inclosure. Turn around the corner, following the path on the eastern side of the inclosure, pass Eyeworth Lodge and finally reach your car park start point. HIGHLIGHTS – Solent Way is quite the distance overall – just shy of 100 kilometres as the route goes through Hampshire from Milford-on-Sea towards Emsworth Harbour. Usually finished in eight stages over a number of days, going past marshes, heaths, coasts, estuaries and, of course, plenty of woods. New Forest doesn’t actually cover the entirety of Solent Way, so purists keen on just doing the New Forest route can just stick to the route that goes from Lymington to Hythe, a full day or two of 28 kilometre’s of trekking overall, allowing hikers to still tick the “I did a New Forest hike” tick box.

New Forest’s section of Solent Way goes by Sowley Pond, which has been designated as a Site of Special Scientific Interest for wildlife. The route crosses fields, rivers and wooded areas, including the River Beaulieu into the village of Beaulieu, which is very quaint. Beaulieu village houses a historic Cistercian abbey, which was built in the 1200’s. The abbey was damaged by Henry VIII in 1538.

DIRECTIONS – This trail is waymarked, marked as such on the iOS maps of the area.

Starting at Lymington, you must cross the estuary to head in to the woods and fields along public footpaths. This route follows closely to the coast of southern England, passing the Isle of Wight, but it doesn’t actually travel directly along the coastline, unless you by chance go into Sowley Pond itself.

The route will then take a lot of time going through calming country lanes before reaching the River Beaulieu. Go upstream to the wooded valley into Beaulieu village, and following your short cultural stop there, cross the river and head northwards. The route is marked along the road, but you will cross the open moorlands of Beaulieu Heath.

The hike draws to a close as you cross fields and a railway line, brining you back to the water and through the centre of Hythe, to the end of the pier there. Your end of the trip will bring you to a pebbled beach.

HIGHLIGHTS – Rockford Common hike begins outside of Blashford Lakes Natural Reserve. The lakes here are rewarded and repurposed pits of gravel, filled now with all sorts of birds. An entry here requires a donation, should you wish to extend your hike somewhat. The hike overall will start and finish with a crossing of Rockford Common, a beautiful site to behold, especially so when the heather begins to flower.

Castle Piece is well worth looking out for; it is what remains of an Iron Age hill fort nestled in the oak woods of Roe Inclosure. This is a bit of an adventure in and of itself as you attempt to trace the remaining earthwork’s outlines. Sir Dudley’s Ride is a path, named after Sir Dudley Forwood, a post-World-War-II farmer in New Forest. A plaque along the route commemorates services once rendered to New Forest.

DIRECTIONS – To start the route, begin by the car park by Rockford Common, east of Blashford Lakes. Follow the past north-eastward across Rockford Common, into Applesdale Inclosure. Keep going through the Red Shoot woods wtowards Amie’s Corner, before taking a right and exploring Roe Inclosure. Here, at the centre, is another Iron Age hill fort called Castle Piece.

From Castle Piece, follow the track eastward towards the open moors. Head towards the underpass which crosses over the A31, then head southwards down the path above the boggy ditches on both sides. You’ll then pass Berry Woods to your left and traverse Sir Dudley’s Ride, which is a not-so-distinctive grass path.

At the footbridge, cross over the river, then go through Ridley Wood and back underneath the main road. The path should now be bending north-west over Marrowbones Hill, down towards Linford Brook. This will bring you back to Red Shoot Wood, and from here it is merely a quick stroll to Rockford Common, where you started.

HIGHLIGHTS – A portion of this hiking route goes along the abandoned Dorchester-Southampton rail line, first opened back in 1847. This railway line took a winding route right across New Forest, so much so that it was known as the Castleman’s Corkscrew. While some of this original rail line is still in use today, New Forest sections you will walk on were closed back in the 60’s, and are now designated cycle and pedestrian track.

This route also includes a naked man… carved into a tree stump. This tree was once used for hanging highwaymen who were found guilty. Several stories have attempted to explain why this tree got such an odd name, one of which claims that one convicted criminal waiting to be hung was struck by lightning, which burnt all his clothes off.

DIRECTIONS – Starting at Burley, go south-east along the road and cut off on to a footpath before reaching the golf course, over Turf Hill. There’s a river at the bottom of this hill, where grounds can become waterlogged. However, there are a few footbridges there. On the other side of the river is the disused rail line.

Make a left turn, following the disused rail line until you reach Holmsley Passage. Follow the footpath that fronts the rightward junction, following it outside of Holmsely Inclosure, before crossing a road onto another path which takes you into Wooton Coppice and Brownhill Inclosure. Turning left will take you into Wilverley Inclosure, where the woods are a good mix of conifers and broadleaf, all under the management of Forestry England.

Take the exit to the inclosure’s east, keeping the inclosure wall to your left before approaching the Naked Man. (It’s just a tree, don’t worry.) Approaching the road, take a right turn to follow the road, going to Ferny Knap Inclosure. Cross the river, pass by Rhinefield House-now-Hotel, and into Blackwater Arboretum.

Your route now will curve back round to where your New Forest route begun. Following a small section along Rhinefield Ornamental Drive, take the forested trails in South Oakley and Anderwood Inclosures, which will bring you back to Burley.