TRUCK CAMPING – Your Home in the Great Outdoors 🛻

Essentially, truck camping allows you to take a mobile home pretty much everywhere with you. It gives you the freedom of seeing the great outdoors and Mother Nature at her prettiest, while also giving you the added freedom of travelling just about anywhere, in added comfort and with added speed that trekking or hiking simply can’t give you.

And it’s a massive industry; recreational truck camping pulls in over $20 US dollars every year, and with over 56% of truck campers saying they’d go again sometime this year, it’s an ever-growing recreation. It’s a fun activity that certainly saves on a few hotel fees too!

If you’re planning on visiting the outdoors in your own mobile home and want some helpful tips and tricks to get you started, look no further. Here are some handy tips for the vehicles, camping styles and the gear and equipment you’ll need in order to go truck camping. 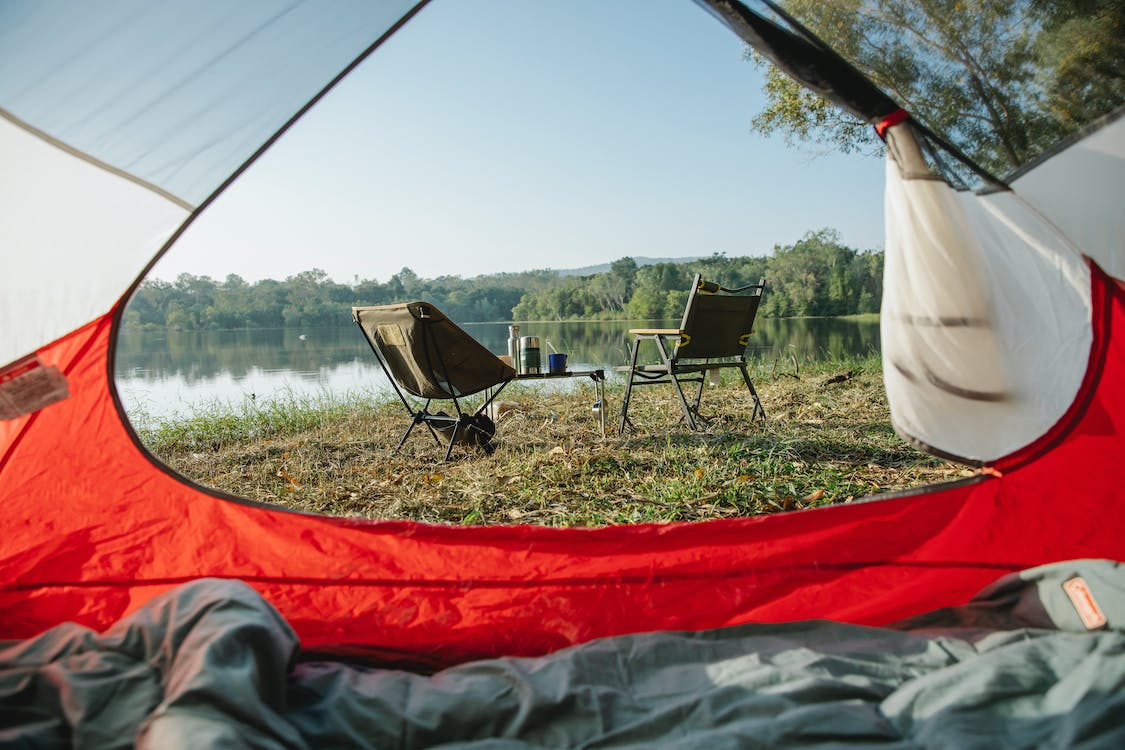 A truck bed tent is a great and inexpensive way to start camping in the back of your truck. However you cannot install more permanent or custom truck bed sleeping platforms with this method, and the setup process of the truck bed tent can be just as cumbersome as a ground tent.

TRADITIONAL TENT CAMPING – This is the most basic, likely most familiar, and almost certainly the cheapest type of camping. Right off the bat then, it’s ideal for people who are new to truck camping; it simply involves taking a tent with you in your truck that you then open up once you’ve reached your camping destination. Its other advantages lie in its flexibility; you can choose where exactly you’d like to pitch the tent; you can be as close to or as far from your truck as you like, under the shade of a tree or next to a gently flowing river – it’s up to you!

The tent being on the ground makes it much easier to get in and out of, while also giving you the added insulation from the ground and keeping you away from any cold breezes that you’d otherwise get with a rooftop bed setup. Since you take your own tent, there’s no fixed size your tent has to be. Tent camping’s biggest plus, however, is that if you want to explore the area you’ve pitched up at, you don’t need to disassemble and pack up your gear if you want to leave the campsite to explore the local area.

Its disadvantages come from the fact that tents simply take a while longer to set up than any other type of truck camping, and sleeping on the ground may not be best for anyone who would otherwise wish to stay away from other things that sleep on the floor.

ROOFTOP CANOPY CAMPING – Also known as a “truck cap”, a truck bed canopy is basically a box cover that fits on top of the bed of your truck. They were first popularised heavily in Africa and Australia before becoming equally as popular in, primarily, the States, and elsewhere abroad. It helps to keep your storage safe from the elements – and from anyone planning to steal anything – but this space can also be used to sleep in when you end up going truck camping.

Lots of people do often make their own beds for truck camping when using a rooftop canopy, by fitting in an extra space for storage and even a sleeping platform. The canopy’s quick-pitch setup allows for a more comfortable camping experience, and it’s easier to cover much more ground with one on, and the raised elevation above the ground will certainly protect you more from anything that might do otherwise closer to the ground, and catch a cool breeze on a hot day.

They’re as easy as pitching up to the campsite and erecting your tent in a couple of minutes. It does have a couple of limitations, however; they can be a little troublesome to set up in the first place for newbies, and with added height to your truck, it does limit you having any taller items, and it creates some drag when driving which isn’t great for fuel efficiency. There’s also the added risk of your entire truck tipping due to the added height, especially when driving on the road.

CONVERSION CAMPING – This is the broadest form of truck camping; there are several styles, methods and custom builds that come with conversion camping – a simple google search with show you just how broad the variety of converted trucks for truck camping there really are, so I’ll keep it simple: conversion camping permanently turns your entire truck into a home on wheels, like a mini camper van or an RV, meaning there will be no time spent setting up your sleeping quarters when you arrive, as everything has already been set up.

Its advantages are huge: a very comfortable bed of your personal choice and fitting, the security of having a locked car, and a solid roof, walls and doors to keep anything – and anyONE – out. Essentially being in a regular truck with a converted interior, you’re also able to just simply park up in residential areas where camping would otherwise not be allowed.

The most commonly-done setup for conversion truck camping is a roll-out drawer system, with a bed and frame atop, which allows campers to put their storage for truck camping supplies underneath the bed.

Its only real downsides come with the time and effort in making your converted truck in the first place, and the set-limited space you’ll have inside – a bigger disadvantage the more and more people you plan on going conversion truck camping with. It’s also more convenient camping-wise if you have a separate vehicle for camping rather than using your everyday vehicle, otherwise taking your camping gear and equipment apart on a regular basis could become a bit of a chore. 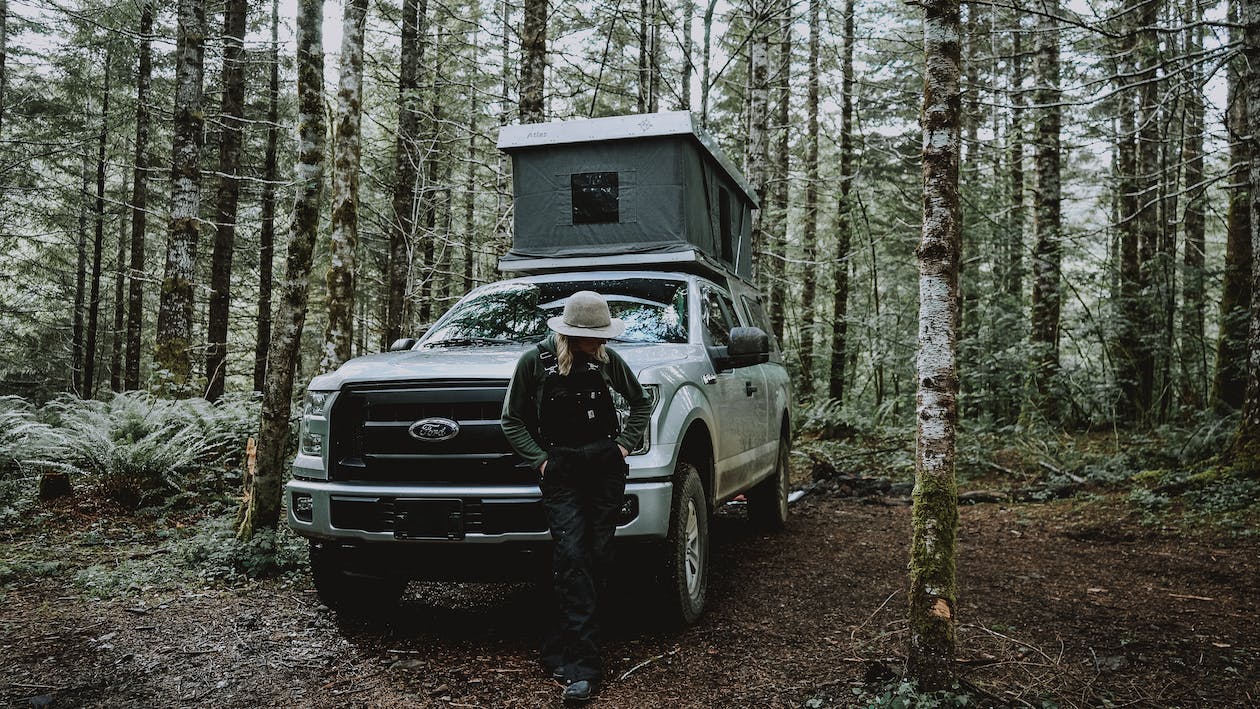 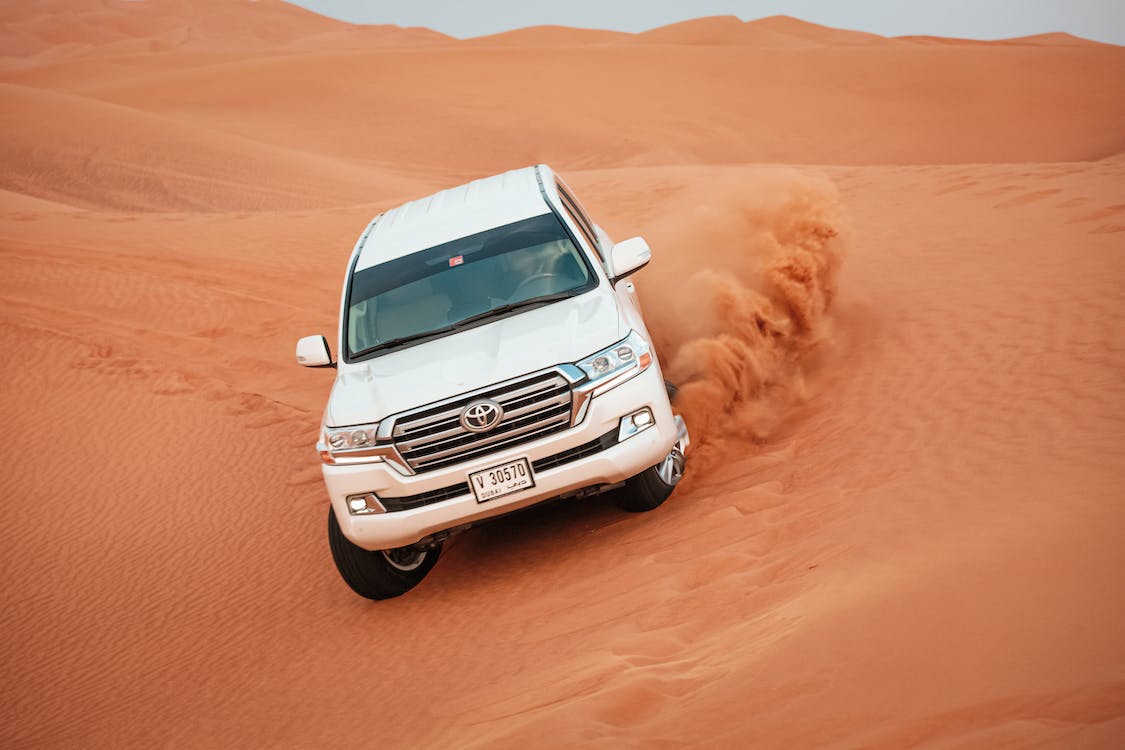 For people experienced in truck camping, the choice of trucks is like football fans supporting different teams – they’re fighting words. In the end, some trucks are better than others in certain ways and vice-versa, but any truck that can get you safely and comfortably from point A to point B and back is a good truck. There are tonnes of potential truck camping vehicles to choose from, so to keep it simple, here are some of the more popular ones:

TOYOTA LANDCRUISER – The Landcruiser is also synonymous with the idea of truck camping; it’s exactly what most Toyota’s are designed to do: go off the beaten track and deal with rugged terrain, and they’ve been doing it the best for decades now.

One recommended model in particular is the 1989 FJ62, with its powerful F2 engine and an inline six-cylinder well known for its output of huge amounts of torque, giving it the strength to go pretty much wherever you please, and a good five-speed transmission for those necessary journeys on the roads.

LAND ROVER DEFENDER – Another icon of the rugged outdoors, the Landcruiser and the Defender are often the two top choices for truck camping. Defenders are well renowned as being of a tough utilitarian design, and its classic look is iconic and beloved. For truck camping car fans and gear heads, it’s ideal – it is a tough-as-nails car.

A downside is its demand; while it ages and keeps its value for current owners, it’s a lot tougher for people just looking to get one at a cheaper price. But its biggest downside is reliability; while no hill is too hard for one to climb, Land Rovers have a well known reputation for breaking down quite frequently – they’re often bought by people who like to fix their cars a lot.

SUZUKI SAMURAI / JIMNY – Suzukis are smaller cars than their other truck camping counterparts, and usually lack the power and torque of the others. However, their smaller size makes them far more economical, reliable, manoeuvrable, lighter and easier to fix and maintain when truck camping. They’re also kind of cute, to be honest.

TOYOTA HILUX / TACOMA – Defenders and Land Cruisers often go for a high price, leaving a gap for a newcomer in the meantime; the Toyota Hilux and Tacoma are pretty comparable, but the Hilux takes the edge in terms of its engine size and its payload.

If anyone is a fan of Top Gear, you might recall the Hilux’s biggest strength: its sheer indestructibility – left in the sea, set on fire, smashed, crashed and even dropped from a tower block, this thing simply will not die. There’s even a model simply called “the Invincible” in recognition of this. So if it’s reliability you’re after for truck camping, look no further.

SETTING UP YOUR TRUCK CAMPING COOKING STATION AND KITCHEN SUPPLIES 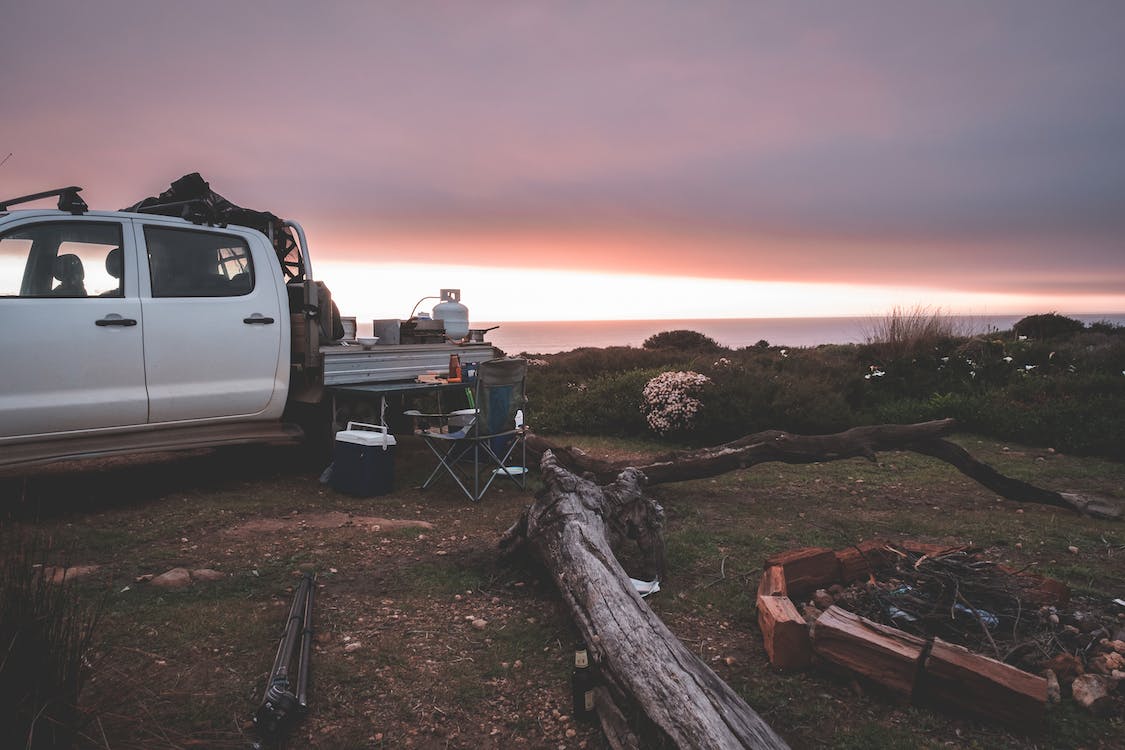 Yes’ it’s possible and easier to live off of canned foods and biscuits, but it’s better to wake up to a cooked breakfast as well. Unlike RV’s, which come with their own kitchen at the back, truck camping means you’ll have to do all of your cooking outside and on the campgrounds. When it comes to prepping and cooking food, you need some open air and space, so using the boot of your car for cooking is ideal. There’s also the option of customising your truck’s bed to include a pull-out counter to put your stove atop.

As for the stove itself, it’s generally recommended the you use a propane stove; you don’t need to get a headache working out how to start a fire, since this stove option comes with its own easy-to-pack fuel canisters. It’s also important to keep your cooking utensils to a minimum; a place to actually prep and a stove to actually cook are of course essentials, and the other recommended bare-minimums are cast-iron skillets and covers, soup pots, and a coffee percolator.

Don’t forget to also separate your cold food from your hot food in separate dry and cold storages; storage boxes and Ziplocs are good dry storage options, and a simple cooler should do the trick for cold foods and drinks. Reusable cups, cutlery, pairing and butching knifes, a kettle, lighters, oven gloves and a dish soap and sponge should be all else that you’ll need.

The people you should be concerned about are not necessarily the homeless, but more often the campers found around you. That said, one should also be aware of snakes, birds, bears, and coyotes. The elements, including rain, wind, and even hurricanes and tornadoes, also pose a potential threat while truck camping.

You will need access to water when truck camping. Simple. How you go about this though depends on where you want to go truck camping. For more remote locations, you’ll perhaps need more water, whereas most established campsites tend to have a water supply.

If and when you need your own supply of water, there are systems that can be installed via a roof rack, potentially doubling-up as a hot water supply for a shower. For this, around 25 litres is recommended, and could last you a few days. If you’re going to a truck camping site, check the grounds’ website before visiting to scan for their bathroom situation. For people truck camping out in the wild, if you’re near a river, your bathing situation is quite simple, and with a water filter, so is your drinking situation.

Some campsites will have access to power supplies and plugins. Otherwise, you’ll need access to your own power inverter, which will allow you to convert battery power into utilisable power for your truck camping set-up. Dual batteries and isolators come in handy too. Overall, though, it’s comportment to remember to conserve your power, especially if you’re wild truck camping – you never know when you might need it. 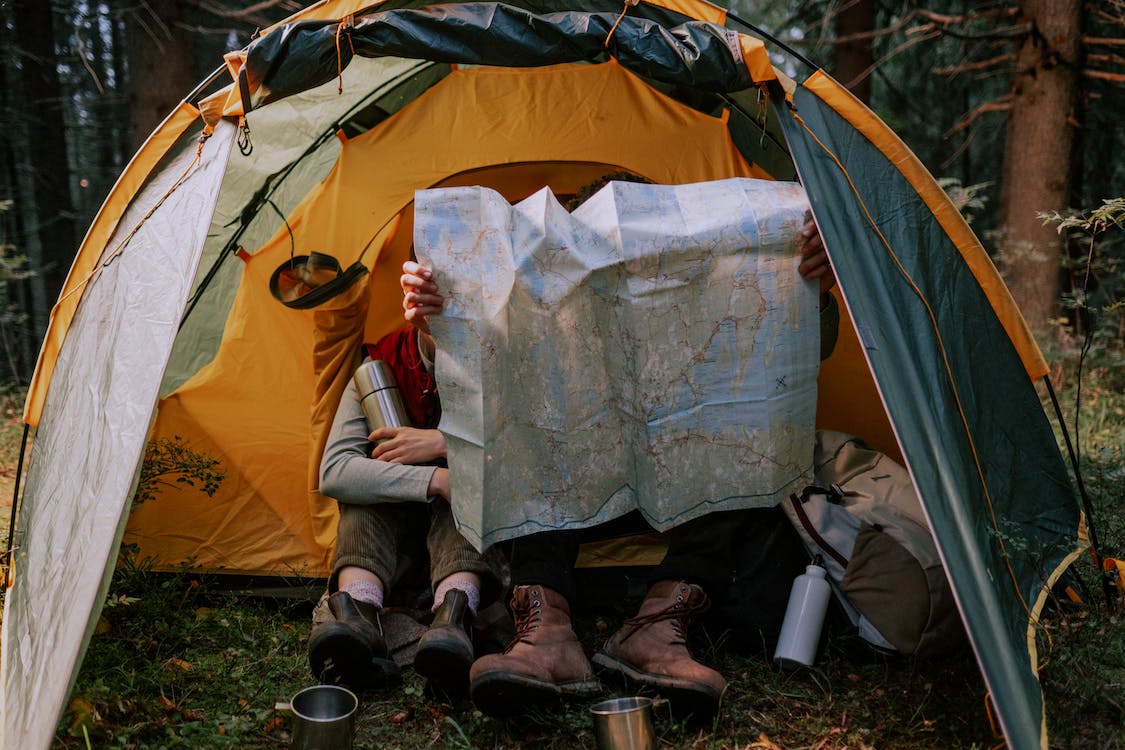 Visit pitchup.com to find the best truck camping sites near you.

Visit our website for our own Adventure Magazine and Guides